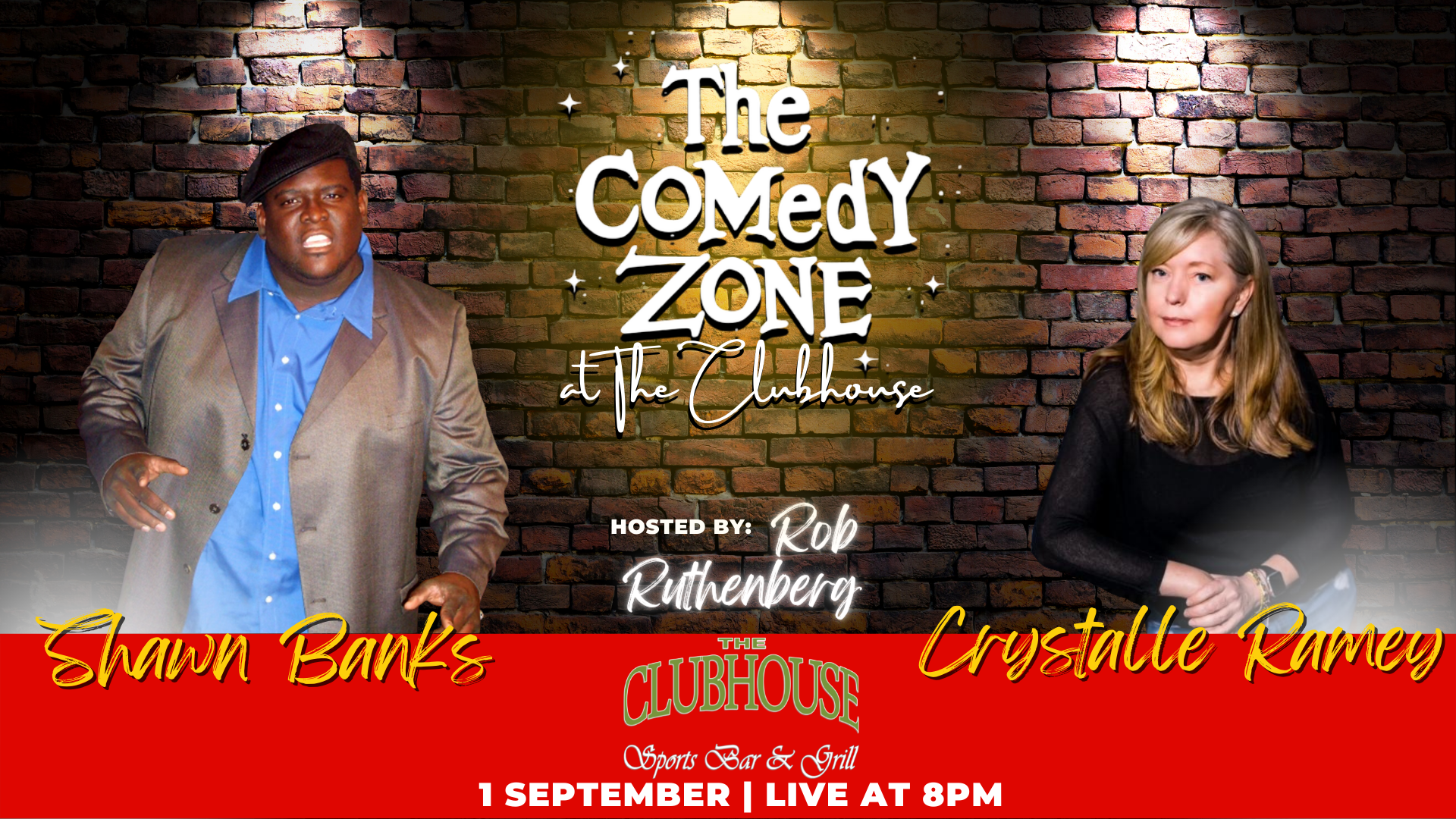 Stand-up Comedy returns to The Clubhouse, Lynchburg, Va! Tickets $10 in advance, $15 ATD. Purchase your tickets today!
Headliner: Shawn Banks
Shawn Banks has been exploding in comedy clubs and theaters across the country. Shawn’s most recognizable asset when he takes the stage is his presence. At 6’3″ and built like a Defensive Tackle, you can definitely feel his presence.
Shawn’s brand of comedy can be explained as “Happy-Sarcastic” with stories and slanted point of views on everyday life. His Family-Fun humor landed a Stand-Up spot on the nationally syndicated TOM JOYNER SKY SHOW at the WALT-DISNEY WORLD RESORT. The show is also heard by over 10-million listeners across the country daily. Shawn was also a Finalist for COMEDY CENTRAL’S South Beach Comedy Festival & Open Mic Fight. Additionally, Shawn won $1000 and a first-place bid in NESTLE-PURINA’S Pet Comedy Challenge and competed and WON another $5000 CASH prize in St. Louis, MO. Shawn was also a semifinalist on NBC’s “America’s Got Talent” and was also seen on the 2nd Season of “Bill Bellamy’s Who’s Got Jokes” on TV One.
Shawn does not stop with just comedy, he has been seen on the Big Screen in Summit Entertainment’s “NEVER BACK DOWN”; the BIO Networks Celebrity Ghost Stories and he can be seen on TV One’s Celebrity Crime Stories portraying NOTORIOUS BIG. Shawn Banks has performed with many comics in today’s market such as: Sinbad, Earthquake, Bruce-Bruce, Sommore, Bill Bellamy, Rickey Smiley and more. Shawn enjoys and has great pride in his versatility of performing both mainstream and urban audiences, as well as clean corporate humor.
Feature Act: Crystalle Ramey
Originally from Charlotte NC, Stand Up Comedian Crystalle Ramey took a comedy class several years ago to overcome a fear of microphones; onset by a debilitating experience in a Middle School talent show that left her running off stage, crying for her mommy. Although she no longer fears microphones, she still confidently cries for her mommy after every show. #therapy
Due to a failed depth-perception test, Crystalle missed her opportunity to fulfill her dream to become an astronaut. She quickly pivoted and became a marksmanship coach in the Marine Corps. She’s now a veteran (and will tell you about it – Marines are worse than vegans) who produces a comedy tour (The 22 Tour) dedicated to leverage the healing power of laughter to put an end to the 22 (daily) military suicides. The tour showcases all veteran comedians and is nationwide. www.The22Tour.com
Crystalle’s comedy is inspired by decades spent in corporate America, life as a Marine during the 90s and just general world observations and angst.
She was most recently a finalist in the 2020 Ultimate Comic Challenge, a featured performer in the 2020 NYC Underground Comedy festival and has participated in the NY SheDevil Comedy Festival, NC Comedy Festival and the Queen City Comedy Festival and has opened for many nationally touring headliners (Jim Norton, Gabriel Iglesias, Mike Lawrence and Andrew Santino to name a few).
Follow her antics on social media @crystallera and her website www.crystalleramey.com

The Comedy Zone appears on the first Thursday of each month here at The Clubhouse @8pm!